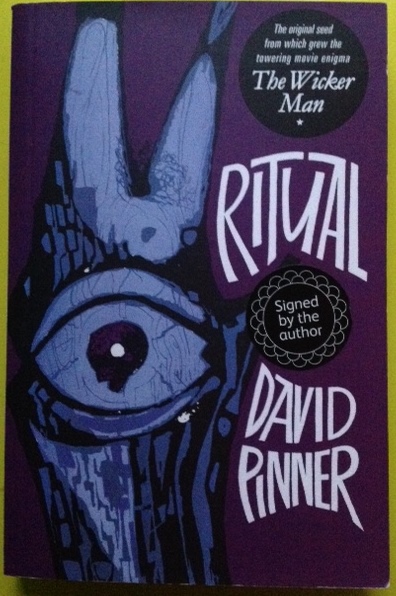 It’s interesting just how often cult movies and cult novels are symbiotically linked together. I don’t know if it’s the emergence of the film that drives an interest in the book or vice versa but I suspect its more likely that cult status attaches faster and more publically to films. Over the years I have watched the British horror movie, The Wicker Man go from a rather risible entertainment, firmly in the B-Movie category, to cult status and on to mainstream acceptance as one of this country’s premier filmic offerings. All of this is, of course, a story in itself: one that illuminates just how often the cult film or book gets a reputation well in excess of any real artistic or intellectual merit.

The growing reputation of The Wicker Man has had the effect of drawing attention to one of its key sources – David Pinner’s 1967 novel, Ritual. Starting life as a Shakespearean actor, Pinner turned to novel writing, with Ritual being his first to be published in 1967. After reading a copy, film-maker, Anthony Schaffer also purchased the film rights and started planning for an adaptation. However, Pinner’s book had its problems in terms of its cinematic potential and Schaffer decided to write his own version, drawing extensively on Pinner’s but making several major changes of both location, personnel and denouement. He called his version The Wicker Man – and the rest is cultural history.

Pinner’s novel, however, drifted out of sight. The version I have is a 2011 reprint by Finders Keepers which, although it’s a nice little production, has also failed to raise the book’s profile significantly and it remains a book that bears all the hallmarks of a cult classic – hard to find and not widely appreciated.

Providing the book with an almost hallucinogenic haze from the very outset, Pinner sets his book in a menacing small village in Cornwall where the deeply flawed police officer, David Hanlin turns up to investigate a suspected child murder. A combination of the local population and an almost sentient natural world seem to conspire to bring out some of Hanlin’s repressed impulses. The battle between the policeman’s ‘natural’ self and his police officer persona becomes the site of a battle between Pagan and Christian, age and youth, men and women. And one of the key weapons in these battles is sex and an unbridled carnality permeates the pages of the book without ever quite overwhelming the story.

The personal, individual crisis that washes over Hanlin is very different to the fate that meets Edward Woodward’s policeman-cum-wicker man sacrifice in the film. Hanlin’s experiences in Cornwall see him abandon the police force in favour of an isolated life in the stacks as a librarian – a very different and ultimately less theatrical conclusion than that created by Schaffer’s movie.

I can’t honestly make a case for this as a great, neglected classic. It has plenty of 60s period vibe going on and that gives it enough umph to keep it afloat – but, truthfully, only just. It’s a bit weirder and darker than a contemporary episode of The Avengers with Steed and Mrs Peel – but not a whole lot. You’ll find it a curiosity rather than any sort of revelation I would imagine – but there’s nothing wrong with that is there?