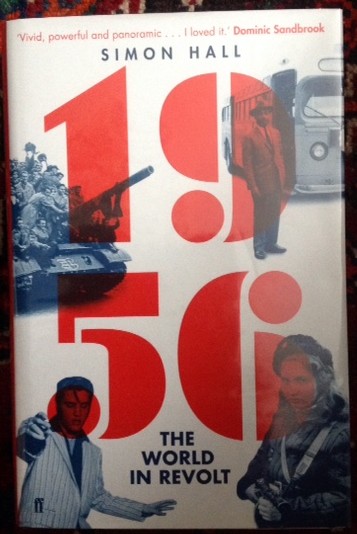 It was also drilled into me then that some periods of time were more interesting than others and packed with all sorts of world-shaping events; although war often dominated these periods, there were also ages in which social change seemed to be the most important – think The Industrial Revolution or The Enlightenment and a host of others.

No-one at that time suggested that The Fifties would ever find a place on this pantheon of key dates – after all, post-war, dull, grey Britain full of men in gabardine macs and women in headscarves was just a pointless, rather depressing place wasn’t it? But I’m delighted to say that Simon Hall’s fascinating 1956 blows a huge hole in this lazy and complacent bit of thinking. I think of myself as an interested and reasonably well-informed watcher of history and politics but in truth I’d never put together the full picture of just how much of real gravity was happening in 1956.

If I have one criticism of the book – and this might seem to be something that is hardly a fault of the author – is that just too much happens. To his credit, Hall wants his overview to be global but his resolutely chronological march through the year sees us having to leap from seething crucible to seething crucible with barely any time to readjust or draw breath.

Hall starts his story in the USA with the early days of Martin Luther King and the Montgomery bus boycott, zips to Khrushchev lobbing his ideological hand-grenade into Soviet politics by denouncing Stalin; takes us off to Ghana and the beginnings of the existential challenge to British Empire; onto a troubled cleric in Cyprus as Archbishop Makarios  is forcibly exiled; and, as Mary Dejevksy notes in her review of the book for The Independent in 2015:

“Still to come are massacres in Algeria, the first stirrings of the rock revolution in the US (Fats Domino, Elvis Presley), Britain's Angry Young Men (John Osborne and all that); racist violence in Texas; and, of course, the two events that most Europeans would probably regard as the staples of 1956: the Suez debacle and the heroic, but doomed, Hungarian Uprising.”

The structure of the book allows you to read it as a continuous narrative and to begin to understand how all these events were working together in a sort of unconscious sympathy – there was, as Hall seems to be suggesting a sort of zeitgeist at work that merits the subtitle he gives the book: it was indeed a world in revolt.

Unlike me, not everyone finds this kind of auditing of a specific individual year to their taste and they have concerns that too much weight is accorded to events simply because they fit within a specific calendar year and are included as significant just because they fit into the concept. This is a view expressed by Bryce Evans writing a review of the book for The Irish Times in 2016 when he said:

“Here, unfortunately, we come to the central problem of the annual-report approach: claim too much interconnection between events in your particular year and you appear hyperbolic; claim too little and you have chronology but no thesis.”

But, for someone like me who was encouraged to give up history as a subject at the age of 13 I find these date-specific books thrilling – they knit events together and fill in missing links and panoramas of history that I would never be able to engage with if I was having to do this research myself.

I suppose you pay your money and you take your choice.

If you want a copy, you’ll find paper and hardbacks available for very modest amounts of money.