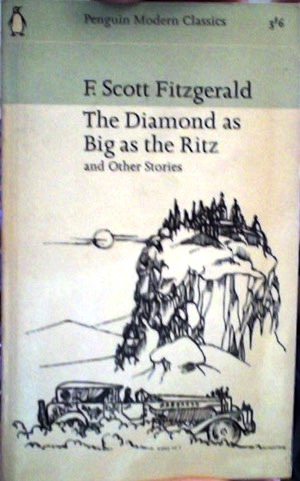 Over the years that I have been reading F Scott Fitzgerald’s short stories I have become used to either the mid-60s Penguin Modern Classics selection (published as The Diamond as Big as the Ritz) or the fifth and sixth volumes of the rather dowdy but beautifully produced Bodley Head Scott Fitzgerald, first published in the late-60s. It seems rather shocking to find that other than on the secondhand market none of these editions are now available, although thankfully Penguin still publishes the short stories more or less in their entirety.

Anyway, The Diamond as Big as the Ritz may well be one of Scott Fitzgerald’s best known stories, but it isn’t to my mind one of his most successful. It falls into the category of fable or perhaps symbolic fairytale and I don’t think that was ever his strongest suit. I prefer him turning his jaundiced eye – whether in melancholy nostalgia or bitter regret or disillusioned loss – on real life, the early years of the twentieth century, post-First World War New York, the Jazz Age of flappers and fashionable young things and Ivy League graduates, and the yearning that pervades his stories of the 30s, as alcoholism and illness gripped him.

It doesn’t really matter in what form you read Scott Fitzgerald’s short stories; it’s more important to read them, because while they are not all absolutely top-class – the sums of money he could make from short stories sometimes clouded his judgement – the very best are as good, and perhaps at times even better, than The Great Gatsby (reviewed HERE on Letterpress).

And just when you think that you know what to expect from Scott Fitzgerald’s short stories, one will come along that surprises you. Last night I was reading some of the stories in volume five of The Bodley Head Scott Fitzgerald. Now this does contain some of his best known and finest stories: ‘Bernice Bobs Her Hair’, ‘The Ice Palace’, ‘Winter Dreams’ and the great early story about post-war New York, ‘May Day’, to name just some.

But the one I was reading was ‘The Rich Boy’, a story I never seem to remember very well and which consequently surprises me each time I read it. It is exemplary in illustrating just how sophisticated and tragic Scott Fitzgerald’s vision actually was. It concerns Anson Hunter, scion of a wealthy family, gilded youth and Yale graduate; sadly, he is one of six children so even when the family’s considerable wealth is divided it will have to stretch quite a long way and Anson won’t be as fabulously rich as he would like. The opening is superb. “Begin with an individual,” Scott Fitzgerald writes, “and before you know it you find that you have created a type; begin with a type, and you find that you have created – nothing. That is because we are all queer fish, queerer behind our faces and voices than we want anyone to know or than we know ourselves.”

This opening is like a subtle fanfare because over the next forty pages Scott Fitzgerald creates a living, breathing individual who, by the time he reaches thirty is also very much a type – a man whose class and breeding and background enable him, under the guise of ‘solid values’, to pursue whatever is in his own very best interests.

Although it isn’t entirely apparent until almost the end, the story is narrated by a friend of Anson Hunter’s, a detached, melancholy, wryly ironic observer very similar to Nick Carraway in The Great Gatsby – and indeed The Rich Boy was the first short story Scott Fitzgerald wrote after completing his greatest novel.

I then read another bitter and disillusioned piece, ‘The Baby Party’, which again is far from a typical Scott Fitzgerald story in that he doesn’t often write ‘domestic’ stories, and this, after a fashion, is what this is. Hardly surprising, perhaps, that at times it seems more like one of Richard Yates’s depressive and alcoholically violent stories – but as ever it somehow still has Scott Fitzgerald’s sly humour, his melancholy and nostalgia and regret.

Anyway, what I’m trying to say is that wherever you find them and in whatever edition you read them, Scott Fitzgerald’s short stories are wonderful. I like the fact that some of them – the best – are quite generous in length. Fitzgerald doesn't really do short, and typically the pace of his stories is quite leisurely – his aim is to capture entire periods, the entire person, rather than oblique, glancing miniatures in which the reader has to fill in much of the background. He is an acute observer and sharply intelligent. And then of course there is his peerless prose – lyrical, melancholy, wearily disillusioned with human frailty (especially his own), but also capable of great and sometimes touching economy. For example, writing of a university football match in The Bowl he says, “The episode is laid away in the most pleasant lavender of my past.” Isn’t that extraordinarily beautiful – you know exactly what he means.

Sometimes it seems that Scott Fitzgerald’s chaotic and self-destructive life really was an effort to sacrifice his talent. It was ultimately all he had, I suppose, and he used it profligately, unsparingly, to back every gamble he made. The critic Cyril Connolly said: “Why is he such a spell-binder? His style sings of hope, his message is despair...”

It’s true, and yet the best of his work can be so heartbreakingly beautiful.

The Greatest Book Jacket Ever?