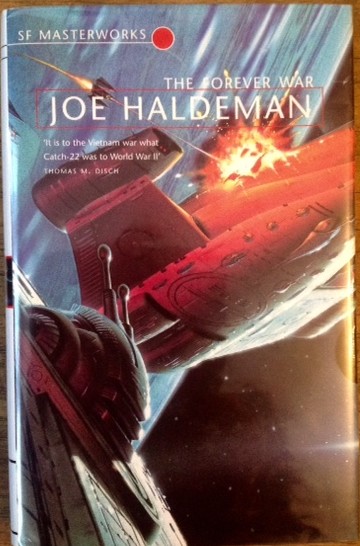 The Forever War by Joe Haldeman

In a recent review of The Hair-Carpet Weavers written by Alun Severn for this site, he expressed his frustration at not being able to find a science fiction novel that transcends its genre:

“I have for some time had the idea that there must be great sci-fi novels out there that transcend their genre and are classics of the literature of ideas. I still think this is the case but my first attempt at proving this to myself turned out to be a rather frustrating failure.”

Perhaps Joe Haldeman’s 1974 classic, The Forever War might go some way to meeting his exacting but entirely fair standards?

William Mandella who is a physics student of promise has been conscripted into the United Nations Exploratory Force – which is actually a euphemism for the fighting expeditionary force that will confront a new enemy, the Taurans. No-one knows anything much about this new alien species but they seem to have attacked an Earth space convoy and this has triggered a decision to mount all-out war against them.

This space war has been made possible by the discovery of a way to use what Haldeman calls ‘collapsars’ – maybe we would think of them as black holes or wormholes – that allow space craft to travel at near light speed across the vast distances of the cosmos. This has the side-effect of completely changing the way Mandella and his colleagues experience time – as they move backwards and forwards they find that they hardly age as hundreds of years pass back on Earth (hence the notion of the ‘forever war’).

Mandella is at the forefront of the war and experiences the training the soldiers need in the extraordinarily dangerous environments. Much of the novel focuses on the day-to-day dramas of the average grunt adapting to treacherous and alien worlds. It’s pretty much clear by this point that Haldeman is not really writing a science fiction novel here but what is a terrifyingly visceral retake on the Vietnam war. Mandella and his fellow grunts could just as easily be in the foreign heat of the Vietnamese jungle as on the terrifying ice planet of Charon.

Mandella serves his time and is demobbed onto Earth, only to find that it’s not the same planet he left – violence has become the everyday experience of the inhabitants and having been away so long he finds it impossible to adapt. Along with his long-term girlfriend, Marygay, Mandella re-enlists thinking they will get a cushy desk job only to be put back onto the frontline – and the likelihood of a bloody death.

Both Mandella and Marygay do make it through despite being separated – they become almost everyman/woman figures – and Mandella finally limps home from the conflict to discover that in the hundreds of years that have elapsed since his last collapsar jump, peace has broken out between Earth and the Taurans. In Earth time the war continued for over a thousand years.

As well as there being echoes here of just about every Vietnam war story, there is a wry, fatalistic humour at work that wouldn’t be out of place in Joseph Heller’s Catch-22. But not everything here works quite as well – especially the description of his time back on Earth which feels absurdly overwrought and melodramatic and the relentless death toll and savage injuries inflicted on the trainee soldiers feels a touch gratuitous.

Reviewing the book for The Guardian in 2011, Sam Jordison also acknowledges these failing but he makes the case for the book transcending these minor faults. In the end I have to agree with his conclusion when he says:

“This is an enraged and enraging classic that deserves a place alongside Apocalypse Now and The Deer Hunter as an expression of the pain caused by Vietnam.”