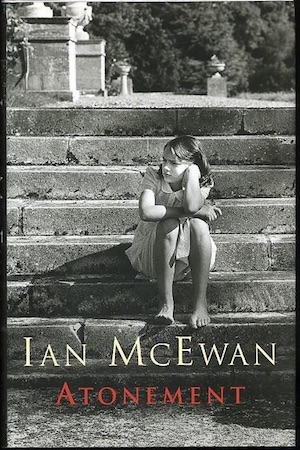 Like many, I suspect, I have been turning to books I have read before, books whose familiarity offers a degree of comfort, and I found myself returning, far sooner than ever I had planned, to some of Ian McEwan’s novels (see this piece).

In the early days of lockdown, I reread three in a gulp – Amsterdam, Black Dogs and The Children Act. As on last reading, I found Amsterdam stage-y and old-fashioned but hugely entertaining. Black Dogs (his fifth novel) is still an early favourite. And I still think The Children Act a terrific book, one of McEwan’s most perfectly realised novels. I love its background of family law, the setting of Lincoln’s Inn Fields, the tangible, touchable, knowable character that the high court judge Fiona Maye becomes, and McEwan’s splendid incidental writing about music.

Atonement is a grand, symphonic historical novel in which some of the strongest elements are other literary influences and techniques. But it is also not quite what it appears to be and in this it has something in common with McEwan’s later novel, Sweet Tooth.

Atonement opens in 1935. Rearmament is in the air, but this seems a long way from the concerns of the Tallis household at their grand country estate. The family is preparing for the return of middle child Leon from university, accompanied by a wealthy young businessman friend, and the arrival of cousins ‘from the north’ – Lois and her younger twin brothers, whose parents are engaged in a bitter divorce.

The household consists of mother Emily, a near-invalid, a martyr to migraine; oldest daughter Cecilia, also recently graduated from Cambridge; Briony, the youngest, a precocious thirteen-year old, in love with fantasy and adventure and the writing of ‘plays’, one of which will be performed for the family this very evening; and Robbie Turner, the housekeeper’s son, whose education has been paid for by the Tallises and whose home is a grace-and-favour cottage given to his mother in appreciation of her many years’ service for the family. An absent figure is father Jack Tallis, a Whitehall civil servant, whose mysterious work – in fact intimately concerned with rearmament and war planning – keeps him almost entirely in London, sleeping at his club, divorced from family life, and possibly engaged in an affair. Into this somewhat febrile and privileged atmosphere will come the other five arrivals.

In this long opening section, a meditation on English country life, class and conflict, Evelyn Waugh’s Brideshead Revisited looms large. If it seems unfocused or lacking in the clear, incisive forward momentum and utter control we expect from McEwan – well, I will simply say there are reasons for this and all will become clear. It is in this opening section that an incident happens which will ruin the life of Robbie, the housekeeper’s son, and see him imprisoned for several years before enlisting on the outbreak of war. As in other McEwan novels, this incident involves sex, naivety and a mistaken view of what has been witnessed. It is this incident that drives the lifelong quest for atonement of the novel’s title.

The second section is utterly different and we seem to be returning to the McEwan we know and love – complete control, graphic, sometimes even shocking. It describes the chaos and cruelty and horror of the retreat of the British Expeditionary Force from Dunkirk as experienced by Robbie Turner.

The third section – equally graphic, equally gruelling – describes the rigours of training for wartime nursing as experienced by both Briony and her older sister Cecilia and the appalling injuries of the successive waves of casualties arriving from Dunkirk.

The final section – a relatively short postscript – serves to some degree to set in context (and to cast some doubt on) almost everything that we have so far read and is recounted by Briony Tallis, now 77 and in failing health, as she returns to the Tallis estate, now a hotel and conference centre sort of place, for a family reunion.

Rereading reveals the underlying structure, method and purpose of Atonement and confirms (yet again) how shallow and perfunctory my first reading of the novel must have been. It is ambitious in ways that only become apparent as you finish its final pages. It is elegiac and rich in literary allusion and experiment, even if this isn’t immediately evident; and it is an audacious act of ventriloquism. It must also be said that McEwan is in complete control – paradoxically, even at those times when the structure of the book requires him to relinquish control. There is nothing here that is unintentional – not even, I suspect, the occasional congestion and lifelessness, the impression that the novel might sink under the weight of its ambitions.

But rereading also helped me understand why I don’t enjoy it. Atonement is a novel contrived primarily to enable McEwan to achieve his own complex structural goals and consequently reading it feels a bit like being an unacknowledged guest at a lavish private spectacle. Even so, I must add that while I don’t expect to read Atonement again, little has equalled the pleasure I have had over the past few years in rereading McEwan’s novels almost in their entirety and for that I shall always be grateful.