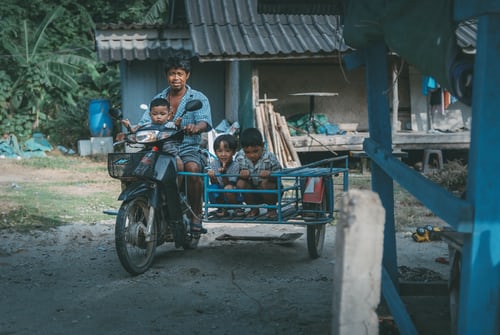 This collection of poems attempts to provide a vivid, challenging and realistic picture of what it means to be a child caught up in war. The poems were constructed from numerous video clips, photographs, books and TV programmes. They should be read as an attempt, on the part of the author, to reflect the terror, horror and abnormality of daily life for so many children.

Stan Tucker is a retired university professor. He has spent most of his life working with, and researching into, the lives of vulnerable children and young people. His work has taken him to many places where children are faced with considerable risks and dangers, are sometimes trafficked as commodities and are the victims of violence and exploitation. The War Child collection is the product of his anger, frustration and a drive to tell a vitally important story.

The War and the Dead Children

We stand disabled by the silence

Consumed by an inward torture

Nonsensically, to an ideal of peace.

Bones, entrails and blood overwhelms us

Evidence of the barbarism of war.

Barely marked are the condemned bodies

The collateral damage of a conflict

That was never their own.

They are quite simply the innocent

No ideology, no power no choice

In the name of another’s ‘truth’.

Do you know this country once signed

A declaration on human rights?

Now lost in a mire of aggression,

And of course the war drags on…..

This Is Not  Her Home

This is not her home,

This is not her war,

This is a refugee camp and

She sees herself as a War Child,

Without hope in a desolate world,

Moved from one prison to another

A political problem; her childhood denied.

She loves puzzles, maths and trees

She hates silence, violence and death.

She misses her dead mother and her sister

But her father she can’t forgive.

She is ‘lost luggage’ that nobody claims

An orphan without a home.

She clings to her friends for comfort

Her only balm to sooth the pain.

She sleeps, she wakes and waits

For someone to take her home,

To a place she barely remembers,

Lost in dreams, and hopes, and tears.

To simplify war through the political loudhailer,

To embolden the aggressor with a sense of right.

To justify the abandonment of defenceless children,

To leave the War Child alone in plight.

Observe the refugee camp in the desert wilderness,

Lost children clinging to each other for hope.

Scratching and fighting for scare resource,

Starvation and disease is the prize for weakness,

For others the outcome is a life run its course.

This camp is not the War Child’s home.

But they remain there abandoned, lonely,

Punished for nothing and left to roam.

To castigate ‘the other’ for humanitarian crises,

To wring our hands and deflect the pain.

To assuage our guilt through strategic soundbites,

To demonise and racially blame.

All this is the War Child’s inheritance.

To stand inside a deep hatred

As a captive of time, of fear.

My loathing appears to be boundless

Standing here in a place of tears.

They took my father and brother

My mother was raped and killed.

I need to take my revenge now

Appease my deep hatred and ills.

I became, I am a Boy Soldier.

Part of a damning  war.

No uniform, no training , no hope,

Told to hate, to demonize, to deplore.

To be fourteen and smell stale death

And yet still to crave for more.

To be the victim and the brutaliser

With a need to settle a score.

Here, we await the ambush

A dirt road that leads to a grave.

Shadowed by the need to be brave.

A boy died this morning

We carried his body back.

We parcelled up his belongings

I became, I am a Boy Soldier.

I know that death is very near

And of course the war drags on…..