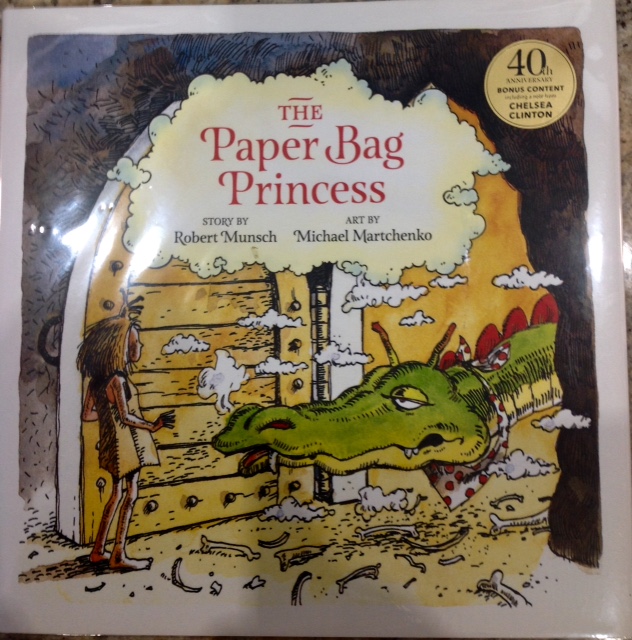 The Paperbag Princess: A Fairytale Worthy of Our Daughters

First published in 1980, The Paper Bag Princess by Robert Munsch was far ahead of its time. In it, Elizabeth is a princess who is meant to be married to a prince called Ronald. But before this can happen, a dragon arrives, kidnaps Ronald and burns down Elizabeth’s castle and all her clothes with it. Dressed in nothing but a makeshift paper bag outfit, Elizabeth sets off to save Ronald. Using her wits to outsmart the dragon, she comes to his rescue. But instead of thanking her, he scolds her for her messy appearance, asking her to come back when she is dressed like a real princess. Elizabeth decides in that moment that Ronald may be dressed like a prince, but is not at all worthy of her affection. Breaking the tradition of fairy tale endings, she gives him a piece of her mind, and the book concludes with “They didn’t get married after all.” On the final page, Elizabeth is shown dancing triumphantly into the distance.

Munsch seems to have effortlessly captured many near universal elements of the female experience. The dragon, for instance, pokes his head out when Elizabeth knocks on the door, and simply says that he has already eaten enough for the day, and that she should come back tomorrow - seeing her not as a threat, but good only for eating. Elizabeth takes advantage of this, using a non-confrontational approach based on wit rather than brute force. Skilfully exploiting the dragon’s ego, she asks “Can you really burn 50 forests at a time? Can you really fly round the world in 10 seconds?”, eventually stepping past a dragon exhausted from showing off to get to the prince. Elizabeth goes it alone on her journey, and achieves a great feat that requires courage, commitment and intelligence. Yet when she arrives, she is judged not based on the merit of her work, but on how she looks.

I think the deepest insight Munsch conveys about gender inequality is that of Elizabeth’s journey. An earlier page of the book depicts her looking lovingly at him with hearts all around her, while he turns away from her, nose high in the air. Why, we might ask, does she take so long to realise that she deserves much better? I can’t help but wonder what her parents told her when she was growing up.

We now know that the messages we internalise in early childhood cast a long shadow into our adult lives and our ability to develop a strong sense of self. Around the world, little girls receive the message each day in obvious and subtle ways that their preferences and their voice matter less than being polite, pleasant, compliant and accepted. Taking Elizabeth’s story writ large, we can all point to the countless women we know - often capable, intelligent, educated - who for far too long, tolerate violations of their emotional and physical boundaries at home, at work and at play. And so, having been ill prepared for it in childhood, many brave women instead embark on this journey as adults.

On International Women’s Day, we celebrate women, but more than ever, we acknowledge the need to reflect deeply on the way we raise our little girls (and boys!). So much more than encouraging women to lean in, speak up, and take the reins, we need to go back to where it begins and thoughtfully, intentionally, wilfully, against the odds - raise women who are strong and secure in their identity as powerful and valuable beings. Like Elizabeth dancing off into the dusk, daughters who know who they really are will be nothing short of unstoppable.

(This piece was originally published in March 2020 and you can check out the blog on this link :