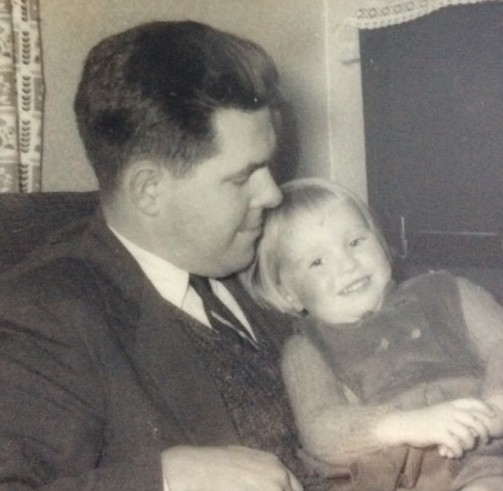 Dad: ‘It’s really very kind of you to let me stay here tonight when I’ve only just met you, but won’t it be too much trouble’?

Me: ‘Of course not, I even have a pair of pyjamas that will fit you and a spare toothbrush, so please don’t worry!

It is difficult to convey the huge relief that I felt at this brief conversation which happened at the end of a strange but memorable evening four years ago. The family had persuaded my worn out mother to have an over- night stay at a local hotel and so my sister and I had organised it as an early birthday present. She needed a rest from dad’s never ending demands as his dementia progressed, especially as this had included sleepless nights for many months.

Things had not quite gone to plan because he had been absolutely furious (to put it mildly) when that afternoon mum had told him that she needed a short break. Luckily her bag was ready packed so my daughter and I urged her to make a hasty exit and not look back. We decided to be firm, hoping that he would switch moods once she wasn’t in view any more. A large whisky certainly helped with this! After a hearty meal he became very subdued, and we hoped that he might be happy to doze with a bit of TV for a while. My daughter and her little girl had to get home so after helping me to tidy up, I was on my own with him for the sleepover.

He then perked up considerably and we chatted about this and that, ‘safe’ subjects like the weather and how he was feeling. Then he went upstairs for the first of his frequent toilet visits. When he came down again, he came towards me with an outstretched hand and a beam across his face - it was so nice to see him looking cheerful for a change. Aware that I needed to be alert to what might follow and to go with the flow, I smiled back and shook his hand. He introduced himself and explained that he was very pleased to meet me because he wanted to show me his paintings. When he had first retired he had become interested in water colour painting and the very competent results now adorned the walls of the living room. It was good to see him take a pride in his work as his artist persona had faded into the background over the past few years. He talked about how some had been inspired by happy holidays in Ireland with mum. I was a bit nervous when she was mentioned in case it triggered those angry feelings again, but it was fine. In fact, he asked me if I had ever met his wife as he thought I would like her.  I decided to play safe and be vague about our relationship because I knew I needed to help him stay in his comfort zone.

Then he asked me who I was and was visibly taken aback when I gave my full name as it appeared that we shared a surname:

Off upstairs for another toilet visit and he came back with a different, determined demeanour. He asked me if I knew the area and wondered if we could go out to a good local pub (he used to love drinking real ale and the whole pub ambience had played an important part in his life). He mentioned a favourite Hampshire pub that he used to frequent for many years. He was starting to get quite insistent, so I knew I had to be deft to keep him onside. I managed to persuade him that all the good pubs were too far away at this late hour and besides, we didn’t have the car. A bit of a sulky silence followed at this disappointing news.

Thankfully it was time for another toilet visit to give both of us time to regroup. A  more brisk and rather formal version of dad returned who explained that he needed to get back home to his house in Tottenham ( where he had grown up) as his mum would be waiting up ( she had died about thirty years ago). He was moving rapidly towards the front door. Quick thinking was needed again on my part as I didn’t want him to get upset but neither did I want him to leave the house. Then, out of the corner of my eye I saw that day’s newspaper headline which was about train strikes in the London area. What a gift! When I pointed this out to him he was at a bit of a loss but then declared that he would get a taxi as it was an emergency. He found his wallet but realised that he didn’t have much cash. We then had the sensible conversation about staying the night at my house.

He was very courteous and co- operative from this point and seemed happy to let me play the part of a landlady. I showed him the bedroom which he was impressed with and he liked the pyjamas:

I guess it would have been inappropriate for the landlady to help him get ready for bed, so I risked going out of the room and returning as myself. He seemed ok with my reappearance, became compliant, eventually let me tuck him in with a kiss on his cheek and he settled down to a brief but comfortable sleep. Phew!

It was a long night. Lots of toilet visits and then help with orienteering himself back around the bedroom. Very restless and irritable in the early hours, getting up and down over and over and he then appeared at the bottom of my bed looking anxious. By now used to my constantly changing role, I decided to try being a storyteller. Lying beside dad on his bed, I began to take him on a journey that I knew he would like by weaving in walks in the woods, then along the Dorset cliff tops under a hot sun and encounters with his much loved Purple Emperor butterfly. Finding a table at his all -time favourite pub and describing a perfect pint enjoyed with a delicious home- made pasty. Walking back carefully along the path in the moonlight, listening to the fierce sea crashing below, over the quiet, sweet smelling fields and safely back home. I’m not quite sure whether we were still in Dorset, Hampshire, Tottenham or Ireland, but he was at last sound asleep and calm. Job done.

Originally published in One Hundred Memories in 2019