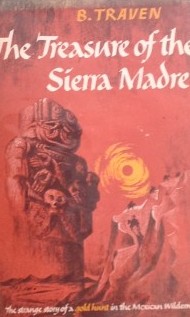 The Treasure of the Sierra Madre  by B. Traven

Just who was B. Traven? The mystery of the identity of the man who took this pseudonym has probably occupied more time and space than that given over to his novels. Frankly, I don’t really care who Traven really was – I’m not sure that knowing this would make any real difference to my appreciation of the writer rather than the man. The small amount I have picked up about him suggests that his body of work is politically progressive and that he saw himself as on the side of the common people – enough to get me interested in the first instance. I also know he wrote The Treasure of the Sierra Madre – the book on which the splendid John Huston film was based and which starred Humphry Bogart and Huston’s dad, Walter. Beyond that, not very much.

So when I picked up a later 1947 hardback reprint of Treasure  I thought this was the perfect opportunity to see what I was missing. In many ways the plot is a very simple one revolving around the search for a legendary lost gold mine and the three men who are at the heart of the story Dobbs, Curtin and Howard. The story is propelled along by the way the three men build their relationship and have it tested by potential usurpers of their fortunes and their seemingly inevitable and murderous falling-out. You don’t need me to tell you the story and in many ways the tale is the least interesting aspect of the book. What is much more fascinating is the way Traven builds characters and then places them in testing situations where they face a series of physical and moral dilemmas. The novel is certainly about greed and human avarice but it’s also about the nature of hope and despair in the hearts of people who have been made into outsiders and life’s perennial losers.

Ultimately the greed for gold makes those who should be bonded together by adversity and experience turn on each other. And, inevitably, the fortune the gold promises to bring turns out to be an illusion, washed away by ignorance, cruelty and stupidity. In the end the tragedy of death and near death driven by the basest human instincts can only understood as if it were some grim, black comedy. The vain endeavour and the irony of the conclusion play out as a metaphor for life lived with crude capitalist values.

Given the inherent drama of the setting of the action and the compelling themes that lie at the heart of the book, I found Traven’s novel oddly flat and quite difficult to engage with. I’m quite prepared to accept that  this might be my problem rather than a fault with the book – there are plenty of people out there who think this is a masterpiece. But for me the book felt a little one-paced and the prose, plain, unembellished and simple sentences, simply failed to lift off. The degrees of shade and light that would have introduced greater dramatic tension just didn’t seem to be part of the writers repertoire and when I craved pace and excitement the author seemed happy with sticking to his own inner rhythm. I couldn’t help but wonder what Cormac McCarthy might have done with this plot line.

So although I was a little disappointed with the book I would still recommend that you go out and buy a copy. There are paperback imprints available and quite a nice old Penguin that can still be picked up for next to nothing.