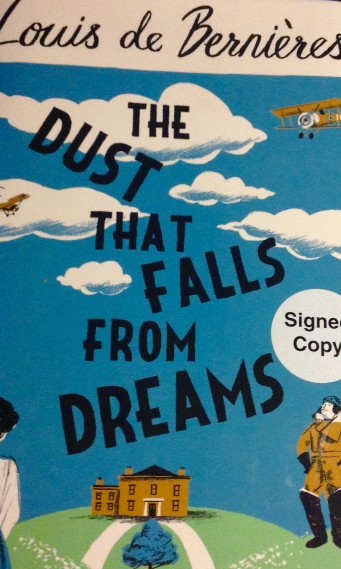 The Dust that falls from Dreams by Louis de Bernieres

I absolutely loathed 'Captain Corelli's Mandolin' which, unlike most people, I found to be tedious and pretentious.  Because of this, I approached his more recent novel with some caution. Much to my relief I soon settled into this affectionate family saga which looks at how the Great War affected what had been a halcyon Edwardian existence in rural Kent. This is hardly a novel theme and one that has to be measured against some pretty stunning stuff like Birdsong by Sebastian Faulkes, but this did it very well. It may have worked because it was largely based on an autobiographical experience whereby Bernieres' paternal grandfather disappeared because his wife continued to mourn her first love, who had been killed in the war. I had never thought about how this might have happened to many women. I can remember being told that there were so many spinsters in the 1920s and 1930s  because of the decimation of a generation of men, but how many women went on to have relationships haunted by what might have been? How many marriages were unconsummated or broke down in other ways because of this?

The eccentric McCosh family is headed by a kindly businessman father who is obsessed with inventing golf gadgets. He is constantly at friendly loggerheads with his very snobbish wife who is obsessed with royalty and etiquette. She becomes even more of a trial over the years as she is deranged by witnessing the effects of a bomb raid when visiting a friend in Folkstone. Hamilton McCosh has a Mr Bennett like persona with his four daughters adoring him in different ways. Two of the daughters, Rosie and Sophie become nurses and spend the war patching up, enduring and sharing the terrible death throes of countless wounded young men. Another episode post war shows us the devastation of the flu epidemic when a survivor who is about to marry the family's maid is nursed by Rosie but dies anyway. Both these sisters end up marrying men Daniel and Fairhead, who have themselves had their share of ghastly war experiences. However, Rosie's childhood sweetheart, an infantry soldier has been killed and she remains in love with his memory for most of the book. Daniel and Fairhead were airmen during the war which gives the author the chance to go into an awful lot of detail about the mechanics of planes and their particular characteristics when in battle. I can understand why this was necessary - and he acknowledges that he loved the chance to ' go beyond the Biggles stories in the afterword, but I confess that I skim read these parts.

I realise that I am not making this book sound like a very attractive read. It is packed with grim details of suffering and horror from different perspectives - as it should be given the era in which it is set. All the family members and the wider community are profoundly affected by the war in different ways. On the other hand, it is full of tenderness and humour and unlike Berniere's grandparents - Rosie and her long suffering husband eventually resolve their early marriage difficulties and begin an exciting new life in Ceylon. Overall, this was a beautifully written compelling read which I would strongly recommend. It’s a far better story than 'Captain Corelli's Mandolin' but would have been even better if it lost a third of its size - perhaps there are too many characters? After all, I haven't even mentioned the other two sisters, Ottolie and Christobel and their complicated lives. There is also an odd encounter between Daniel with Betrand Russell on a train journey which only seems to be there in order to have a philosophical discussion. I would definitely edit out much of the mechanical stuff and stick with the very interesting people, who are beautifully drawn.