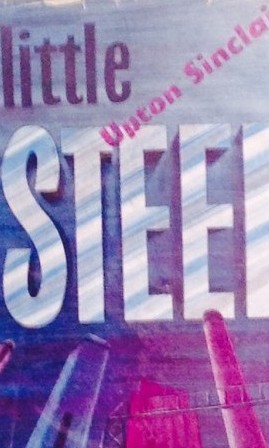 Despite being a Pulitzer Prize winner I suspect that very few people now read much written by Upton Sinclair beyond his most famous novels - The Jungle and Oil ( which was adapted for the film There Will Be Blood ). In Britain we tend to think of the USA as politically balanced between the crazy Right and the extraordinarily crazy Right but that would be to deny the rich Socialist tradition that the Americans can look back on. Sinclair certainly is one of the granddaddies of that radical strand of thinking in the States and was a giant figure in the first half of the 20th century.

Sinclair's fame rests on his role as a 'muckraker' - someone bent on exposing the shameful, dehumanising underbelly of American capitalism. The Jungle, which laid bare the terrible plight of migrant labour in the Chicago stockyards, led to changes in legislation and improvements in the conditions of the workers he campaigned for so assiduously. His campaigning journalistic instincts dominated his early writing and also led him to try to break into formal politics at State level representing a Socialist Party alternative. He was never elected.

After the Second World War Upton Sinclair's writing focussed on the development of a massive saga - the tale of Lanny Budd. Budd, the son of an arms dealer, is shown worming his way into the fabric of the American establishment. Sinclair uses this tale to explore the nature of twentieth century American politics and big business and it was a massive undertaking - running to eleven volumes. Now pretty much unread by the wider public it was this series of novels that led to the award of the Pulitzer Prize.

Little Steel , which was published in 1938, is often characterised as the last Sinclair novel to deal with issues of labour organisation and capitalist industries. The story of a patriarchal steel magnate who succumbs to the Red scare might, at first reading, seem to be a perfectly engaging story of how the trade unions and labour organisers were resisted and demonised in Communist obsessed Middle America but is now of no real significance - a tale which is essentially trapped in a bubble of time which has now been made irrelevant by history. However, in many ways this is a very modern book - one which should resonate with anyone who sees the hegenomy of neo-liberalism as the greatest threat to freedom and equality in Britain today.

Probably the most powerful and sinister part of the book is the opening one hundred pages. In this knowing and archly written section we see a diffident and limp steel manufacturer and factory owner transformed into a campaigning anti-Communist and anti-trade unionist by manipulative and slick management consultants who see him as a useful tool for their own enrichment and engrandisement. The idea that workers have to be prevented from organising by benign philanthropy is a frighteningly current notion - if workers are allowed to come together and talk freely about their circumstances they will naturally understand that the power really lies with them. They need to be diverted from analysing their circumstances by sport and physical endevour.

Once the steel magnate, Quayle, has outlived his usefulness he must be got rid of and there are plenty of reptiles in the Capitalist pit prepared to do the deed. He is saved from being institutionalised by an eccentric friend and escapes to find refuge with his estranged daughter who has married a Left sympathising journalist. However, circumstances conspire to land him a short spell in prison where he has a chance to witness and understand what life on the other side of the American dream looks like. This second half of the book has too many improbable coincidences to engage your sympathies in quite the same way as those opening 100 pages and Quayles hapless pacivity is rather annoying. However, it is still an engaging and thought-provoking read despite the melodrama.

Too much of the heritage of radical literature of the mid-20th century is lost to view and lots of it is out of print ( although it can still be picked up on the second hand market). The proletarian novels of the inter-war years are still relevant to our modern day circumstances and not simply an historical record of a time past and gone. What Sinclair talks about in this novel has direct parallels with life in modern Western economies and we still have much we can take from the insights he has left us with in Little Steel.