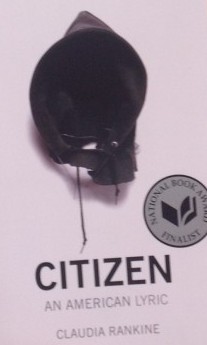 The fact that this book is subtitled An American Lyric  and has been nominated for awards in the category of poetry might reasonably lead you to think this is a collection of verse – and you would be just about as wrong as you could be. Rankine has done something wonderful here by bringing together short lyrically written prose essays, snippets of television film scripts and photography to produce a visceral account of what it means to be black in a white society. Although Rankine’s world is that of the modern-day USA, this is a book about being black in any historically white, colonial country – and that includes the UK.

What the author has achieved here is to make notions like ‘structural’ or ‘institutional’ racism real and tangible. She’s not only interested in the endless, daily acts of discrimination and casual racism that black people encounter but in the way this forms the very environment that black people are forced to live in. For me she produces a really memorable metaphor for this, describing the way black people have to live their life constantly contrasted against a white background.

Rankine is a tennis fan and particularly a supporter of the Williams sisters. I am not a tennis aficionado but even I was moved to outrage by the way she describes how the tennis establishment has systematically belittled and humiliated both Venus and Serena. Sometimes the prejudice is crude and physical – the photograph, for example, of Caroline Wozniaki pretending to be one of the Williams sisters by ‘enhancing’ her body shape with towels stuffed down her top and down the back of her knickers – and sometimes it’s more covert and vindictive ( the tennis umpire who consistently judges line calls against them).

The success of this book in terms of the critical reception it has received helps to address another aspect of the everyday racism – the discrimination at the heart of the publishing industry. Susannah Herbert, executive director of the Forward Arts Foundation, has pointed out that  “Ten years ago, just one per cent of contemporary poetry published by the major presses in Britain was by black or minority ethnic poets – a depressing statistic, suggesting a failure to notice the existence of 14 per cent of the nation”[1] . This is a depressing statistic and maybe the reception given to Citizen  will lead to this kind of hidden racism being confronted. But I, personally, have my doubts because the message that Rankine brings us is that racism is at the very heart of everything white Western cultures do and think. Until we can recognise this, our espousal of the language of equality will be nothing more than cosmetic and the continuous background hurt that racism causes will continue to rumble on like distant thunder.